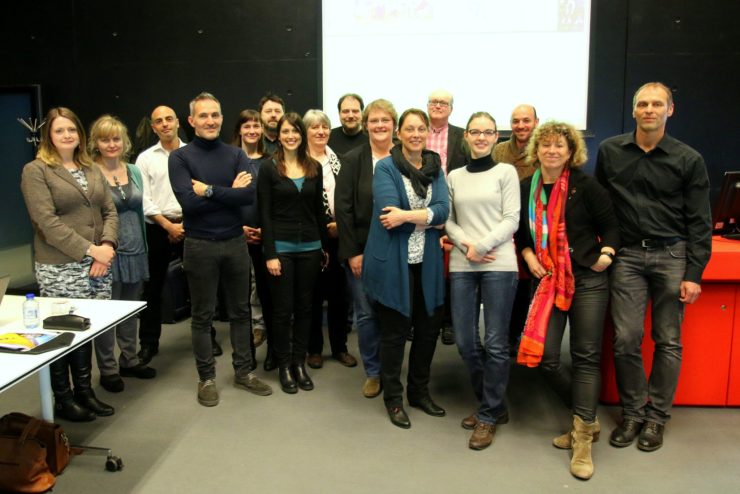 Helwi Blom studied Dutch Law and French Language at the University of Utrecht. She earned her PhD in French Studies from Utrecht University in 2012 and she is currently Lecturer in Comparative Literature at this same university. Her main fields of interest are textual culture, book history and reception studies. She specializes in popular literature (the Bibliothèque bleue) and cultural history in France in the early modern period. Her research focuses on questions concerning the production, distribution and consumption of books containing (editions and adaptations of) medieval epics and chivalric romances in seventeenth-century France. She has published on the printing history of romances of chivalry in the Bibliothèque bleue and on the presence of chapbook editions of these romances in private libraries (17th-18th centuries). She is currently reworking her PhD thesis ‘Vieux Romans’ et ‘Grand Siècle’; éditions et réceptions de la littérature chevaleresque médiévale dans la France du dix-septième siècle for publication.

Juan Gomis is a professor at the Catholic University of Valencia. His research focuses on popular literature in 18th-century Spain, although his interests go beyond this chronological framework, including early and late modern history. He has studied one of the most spread popular genres in Spain, the so-called Literatura de Cordel, from multiple perspectives: cultural representations (religious, political, gender), material aspects of the printings (the “pliegos sueltos”), production and dissemination, and usages and readers. He has also made significant contributions in order to devise a theoretical framework about popular and high culture in this field of study. Among his numerous publications on these topics, his  book Menudencias de imprenta: Producción y circulación de la literatura popular (Valencia, siglo XVIII), published in 2015, stands out as a path breaking study on one of the most important printers in that period. Since 2014, he coordinates the project “Literatura de Cordel: Mapping Pliegos”, which aims to create a database and digital library of all the “pliegos sueltos” published in Spain and Latin America from 1750 through 1950.

Matthew Grenby is Professor of Eighteenth-Century Studies and Director of the Newcastle University Humanities Research Institute at Newcastle University. His research is principally in book history and children’s culture in Britain in the period 1700-1840. He has published on children’s literature, political novels, chapbooks and is currently editing Volume III of the letters of the philosopher, novelist and publisher William Godwin. From 2015 he is President of the British Society for Eighteenth-Century Studies.

Katell Lavéant is associate professor of French literature at the University of Utrecht. Her research focuses on late medieval and early modern popular culture, from an interdisciplinary perspective. She previously worked on the theatrical culture in the French-speaking Low Countries in the 15th and 16th century (Un théâtre des frontières. La culture dramatique dans les provinces du Nord aux XVe et XVIe siècles, Orléans, 2011), and on the links between drama and the law in the Southern Low Countries, with a focus on the Reformation period. Together with Marie Bouhaïk-Gironès and Jelle Koopmans, she is currently working on a 3-volumes edition of the French sotties plays (Recueil des sotties françaises, vol. 1, Paris, 2014). In 2015, she was awarded a VIDI-grant from the Dutch Research organisation NWO for het project ‘Uncovering Joyful Culture: Parodic Literature and Practices in and around the Low Countries (13th-17th centuries). Through the study the cultural practices and the literary production of joyful culture (among which parodic texts in French and Dutch), this project aims at demonstrating the essential role of parody in social cohesion in the pre-modern era. One of the focus points of this project is the production of popular books and their role in the dissemination of joyful and performative culture in Europe in the early modern period.

Drs Marian Lefferts is the Executive Manager of  the Consortium of European Research Libraries, which is responsible for the Heritage of the Printed Book database, the CERL Thesaurus, the CERL Portal for Manuscripts and Early Prints, the Can-You-Help provenance identifier and the Material Evidence in Incunabula database. For more on CERL see Ingeborg Versprille, Marian Lefferts and Cristina Dondi, ‘The Consortium of European Research Libraries (CERL): twenty years of promoting Europe’s cultural heritage in print and manuscript’, in 027.7 Zeitschrift für Bibliothekskultur, 2,1 (2014): Konsortien & Konsorten, pp. 30-40. For those of you who read Dutch, she published about Special Collections in an international context in the Handboek Informatiewetenschap (IV A310). Previously she worked on the British Library’s Illustrated Incunabula Short-Title Catalogue (published on CD-ROM) and, in Leeds, on the International Medieval Bibliography (both the print and CD-ROM publications). Drs Lefferts has two MA’s from the University of Groningen, the Netherlands, one in English Language and Literature, the other in Medieval Studies. She can be found on Twitter as @MRL57 and @cerl_org.

Sabrina Minuzzi is a Postdoctoral Research Fellow (2014-2017) at the Faculty of Medieval and Modern Languages, Oxford, within the 15cBooktrade Project (for further details see http://15cbooktrade.ox.ac.uk/project/project-team/). She is studying and cataloguing, book in hand, copy specific features of incunabula in MEI and textual contents in Text-inc, from the libraries of Venice. She holds a degree in Humanities (Early Modern Italian Literature) from Ca’ Foscari University (Venice) and a PhD in Early Modern History (Social History of Medicine) funded by the University of Verona. Sabrina worked at several rare books and archival projects, mostly funded by Ca’ Foscari University and by Regione Veneto. Her PhD research is now becoming a book, Sul filo dei segreti. Farmacopea, libri e pratiche terapeutiche a Venezia in età moderna, Unicopli: Milano, forthcoming.

Dr Jennifer Orr is Lecturer in Eighteenth-Century Literature at Newcastle University. She completed her doctoral thesis at the University of Glasgow which revises the life and works of the Irish poet Samuel Thomson (1766-1816) and his early romantic period circle of fellow poets and intellectuals. Her monograph, drawn from this research, will be published by Palgrave Macmillan in a monograph titled Literary Networks and Irish Dissenting Print Culture in the New Year 2015. She has taught English Literature at the Universities of Oxford, Glasgow and Newcastle from Medieval to modern poetry. At Newcastle she is beginning research into northern working-class poetry associated particularly with the North East industrial landscape, funded by the Newcastle Institute for Social Renewal. Her recent publications include studies of United Irish poetry, the contemporary and critical reception of Scottish and Irish literature and culture, romantic poetic circles and their historical context in Britain and Ireland during the ‘long’ eighteenth century. She is the editor of Four Courts publication ‘Fostering an Irish Writer’s Circle: the correspondence of Samuel Thomson (1766-1816)’ which is the first collected edition of the letters of Thomson and his circle.

Joad Raymond is Professor of Renaissance Studies at Queen Mary University of London. he has published extensively on Milton, book history, and the history of news. He has published several books: Milton’s Angels: the Early-Modern Imagination (2010), Pamphlets and Pamphleteering in Early Modern Britain(2003), The Invention of the Newspaper: English Newsbooks, 1641-1649 (1996), (ed.) The Oxford History of Popular Print Culture, vol. 1: Cheap Print in Britain and Ireland to 1660 (2011) and (ed.)News Networks in Seventeenth-century Britain and Europe (2006). He is presently editing Milton’s defences for the Oxford University Press edition of the complete works, and writing a history of news communication in early modern Europe.

Massimo Rospocher completed his PhD in History at the European University Institute (Florence). He was adjunct professor of Historical Methodology at the University of Trento and he is currently a permanent researcher at the Italian and German Historical Institute (Istituto storico italo-germanico – Italienisch-Deutsche Historische Institut, Trento). He has held fellowships from a number of institutions including the British Academy, CRRS (Toronto), McGill University (Montreal), University of Melbourne, Beinecke Library (Yale University). His area of research is the political and cultural history of early modern Europe, focusing particularly on the ways in which cultural exchange and political communication occurred in urban public spaces through the interaction of orality and print. His essays and articles have been published in English, German, Italian, and Spanish. Among his recent publications: Orality and Writing in Early Modern Italian Society (Ashgate forthcoming 2016); Il papa guerriero. Giulio II nello spazio pubblico europeo (Il Mulino, 2015); Narrating Wars. Early Modern and Contemporary Perspectives (Dunker & Humlot, 2013); Beyond the Public Sphere. Opinions, Publics, Spaces in Early Modern Europe (Dunker & Humlot, 2012).

Jeroen Salman (1961) completed his PhD at the University of Leiden. He is assistant professor of Comparative Literature at the University of Utrecht (j.salman@uu.nl). His main research interests are early modern book history, cultural history, the history of science and popular culture. He has contributed to Poetics, Publishing History, Quaerendo and Jaarboek voor Nederlandse boekgeschiedenis and has recently published a monograph which was the result of a large Utrecht research project around itinerant book trade: Pedlars and the popular press. Itinerant distribution networks in England and the Netherlands (1600-1850) (Brill 2014). Together with Roeland Harms and Joad Raymond he also published the edited volume Not dead things. The dissemination of popular print in Britain, Italy, and the Low Countries, 1500-1900 (Brill 2013). He has held fellowships from the Netherlands Institute of Advanced Studies (Wassenaar) and the John Ryland Research Institute (Manchester). Currently he is the leader of the project ‘The European dimensions of popular print culture’ that aims to develop an international network and a virtual research environment to facilitate and stimulate innovative research on European popular print culture. He is a member of the ‘Descartes Centre of history and philosophy of the sciences and the humanities’ (Utrecht), a member of the editorial board of the book historical Journal Quaerendo and co-editor of a Dutch book historical series (BGNB).

Hannu Salmi is Professor of Cultural History and Vice Dean of the Faculty of Humanities at the University of Turku, Finland. He is the leader of the research project ‘Travelling Notions of Culture: Itineraries of Bildung and Civilisation in Early Nineteenth-Century Europe’ (2012–2016) and the consortium ‘Computational History and the Transformation of Public Discourse in Finland, 1640–1910’ (2016–2019), both funded by the Academy of Finland. He has written several books on nineteenth- and twentieth-century cultural history, including Nineteenth-Century Europe: A Cultural History (Polity, 2008) He has recently edited the volume Travelling Notions of Culture in Early Nineteenth-Century Europe (Routledge, 2016) together with Asko Nivala and Jukka Sarjala.

Rita Schlusemann (schlusemann@zedat.fu-berlin.de) completed her PhD on Dutch and English printed animal epic at the University of Münster and holds her habilitation at the Free University of Berlin. Besides, she is working in the project “Changing Face of Medieval Dutch Narrative Literature in the Early Period of Print (1477- c. 1540)” at the University of Utrecht. Her research focusses on late medieval and early modern printed literature from an interdisciplinary perspective, especially Dutch and German literature, book history and history of science. In 2009 she was awarded the prestigious “Heisenberg-price” by the German Science Foundation, to conduct research on the German-Dutch literary relations and the history of science for several years. She has published numerous books, including the following monographs: Bibliographie der deutschen Übersetzungen niederländischer Literatur (bis 1550) (Berlin: De Gruyter 2011); Schöne Historien. Niederländische Romane im deutschen Spätmittelalter und in der Frühen Neuzeit (Berlin: De Gruyter 2016) and Briefwechsel der Brüder Jacob und Wilhelm Grimm mit niederländischen und belgischen Gelehrten (Hildesheim: Olms 2016).

Julianne Simpson is curator at the John Rylands Research Library in Manchester.

Jennifer Spinks is Lecturer in Early Modern History at the University of Manchester, and was previously an Australian Research Council Postdoctoral Fellow at the University of Melbourne. Her research is particularly concerned with religious polemic and print culture in early modern northern Europe. Her publications include Monstrous Births and Visual Culture in Sixteenth-Century Germany (London, 2009) and The Four Horsemen: Apocalypse, Death and Disaster (Melbourne, 2012; co-edited with Cathy Leahy and Charles Zika and accompanying a collaboratively-curated exhibition). She is currently preparing an exhibition titled ‘Magic, Witches and Devils in the Early Modern World’ to be staged at the John Rylands Library in the first half of 2016 (co-curated with Sasha Handley). In mid 2015 she was an Early Career International Research Fellow at the Australian Research Council Centre of Excellence for the History of Emotions, and she currently holds an Arts and Humanities Research Council UK Early Career Fellowship.